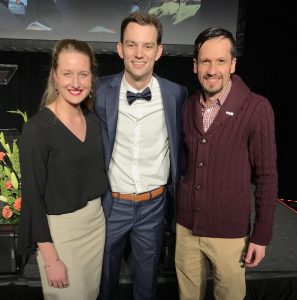 As early as 12 years old, Cameron Magee found his calling when he was able to observe professional sound and video technicians. The young Magee promised not to talk or be a bother. Instead, he would simply watch as they effortlessly manipulated sound and video technology to create perfect events. To his delight, one of the tech gurus extended him the chance of his lifetime. Not only could he watch; he could learn and ask questions.

So began his initial apprenticeship that helped catapult him toward his future career and instilled in him an appreciation for in-depth training.

“Learning alongside those veteran technicians when I was so young was a huge opportunity for me. I realized I had amazing mentors and the experience required I be a good student,” Magee explained.

As owner and founder of ​Magee Brands​, ​Element Studio​ and ​avad3​, a live event production company, he took those lessons of rigorous training and flawless execution to heart. Since its founding in 2011, avad3 has produced hundreds of events across the country for nationally recognized academic institutions, beloved retail and supplier brands and respected U.S. nonprofit organizations.

Visit with him and his team and you’ll learn they are acutely aware of what’s at stake for their clients; the investment that has been made to bring teams together and the pressure to deliver.

With a relentless pursuit for perfection comes a need for growing and training talent.

“Thinking about the future business environment required us to consider whether prospective new hires would have the necessary skills to deliver avad3 excellence,” Magee said. “Our leadership team agreed we had an important opportunity for training so we created a unique and in-depth apprentice program. With this effort, we ensure every team member is equipped to deliver our gold-standard of excellence.”

“The apprenticeship is at the heart of our company and we see it as a long-term investment in our future,” explained Caitlyn Hutchison, Vice President, Magee Brands.

The paid apprenticeship is a full-time, two-year commitment and provides the same benefits as regular, full-time avad3 team members. And, while it does not come with a promise of a permanent position, it does equip its graduates with a unique set of skills and the ability to be job ready should a future role become available.

The apprentices are expected to learn all three of the major departments of lighting, video and audio. They are exposed to outside instructors who are current professionals in each of those areas, in addition to their internal learning. They also learn all aspects through hands-on learning, both in avad3’s 10,000 sq. ft. warehouse and onsite at events. Over the course of the two years, the apprentices go from observing to contributing to running shows.

“The autonomy steadily increases throughout the program. They begin onsite as production hands and conclude the program with the ability to run a small show on their own,” Hutchison added.

“Over the last two years, I have been given an amazing opportunity to develop both character qualities and technical strengths,” explained graduating apprentice Hannah Keener. “I not only feel confident as a Production Tech but also as a Production Manager, and I have been blessed to be a part of over 200 events and have built amazing relationships with dozens of people across NWA and the nation. Completing the apprenticeship is my biggest personal accomplishment yet, and I am so grateful to Cameron and the vision he had in creating this space for me to grow beyond my wildest dreams!”

Originally from Chile, Sebastian Guerra moved to Northwest Arkansas about 2 1⁄2 years ago. In Chile, he worked for a national TV channel and after arriving in NWA a friend suggested he consider avad3.

“To be very honest, I was nervous about working and studying in another language. But I quickly realized this was a great experience. I’m part of a team that produces amazing events and I work alongside amazing people,” Guerra said.

“Since our founding in 2011, we’ve scaled our team, added services to better meet our clients’ needs and perfected an approach to producing conferences and events. It’s great to see our team continue to grow the skills of our apprentices and pay forward the opportunities I received from my mentors long ago. I’m thrilled to share we’ve offered both of this year’s graduates full-time, permanent positions,” Magee said. “Hannah has been promoted to Production Manager and Sebastian Guerra has been promoted to Production Tech.”

The next apprenticeship will begin in June. Company leaders shared they are hoping to create a class of four new apprentices. Applications will be posted in April. Interested parties can reach out now through the ​contact us​ form on avad3’s website, www.avad3.com.

Four Reasons for Getting Life Insurance

14 hours ago by 3W
Life insurance is often thought of as a way to protect loved ones by providing for final expenses, estate taxes, etc. But let's think beyond that. Who else depends on you and your income? "One size fits all" may apply to a lot of things, but not something as ...

1 week ago by 3W
In our 2020 issue, we’re shining the light on some outstanding leading ladies for all their accomplishments and contributions to society. LAURICE HACHEM REAL ESTATE DEVELOPER Laurice was born and raised in southern California where she met her husband, Sam H...

2 weeks ago by 3W
We love our 2020 3W Magazine cover, created by Sunshine School & Development Center Community Support Client Kelli Nichols! Kelli created the painting on canvas called “Patchwork Together” in 1.5 hours, and it was part of the school’s A Very Special Art S...

Smithfield Foods and Gallo Family Vineyards Join Forces to Provide Over 30,000 Pounds of Protein and $33,334 to Northwest Arkansas Food Bank

3 weeks ago by 3W
Smithfield Foods, Inc. and Gallo Family Vineyards partnered to donate more than 30,000 pounds of protein and $33,334 to Northwest Arkansas Food Bank as a result of their Pairings with a Purpose campaign. As part of the program, Smithfield and Gallo committed...

4 weeks ago by 3W
When you’re invited to a party hosted by Danyelle Musselman and Mandy Macke, of course you go. We put on our cutest red attire and went ready to cheer on the Hogs! The Razorback cheer squad kicked things off in style (or should we say spirit?). It’s no surp...

1 month ago by 3W
In our 2020 issue, we’re shining the light on some outstanding leading ladies for all their accomplishments and contributions to society. The leading ladies featured are: Mandy Macke, Laurice Hachem, Megan Crozier, Tareneh Manning, Dr. Evelyn E. Jorgenson, ...