Do you know the meaning behind the name of the company avad3?

“Avad” is Hebrew for “serve,” and avad3 works to serve through audio, video and lighting, the three major components of event production.

“We never capitalize avad3 as a constant reminder that we are servants first. It’s not about us,” founder Cameron Magee says. 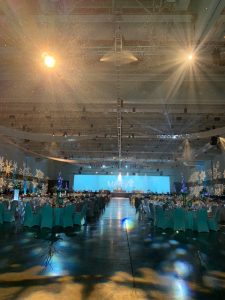 The motto of avad3 is making your event look and sound flawless. The company serves Northwest Arkansas but also travels outside the area; recently Chicago and Tulsa, Oklahoma. For the nonprofit COPS in Chicago, avad3 sent a semi truck full of gear and flew the crew despite a snow storm. The client was beyond impressed with their work, noting in a Google review that “we have never been represented so well by a production company. We will definitely use them again in the future!”

avad3 is involved with events of all sizes and has the flexibility to cover both small and large events.

“This flexibility allows us to serve folks on their biggest, most important days of the year, and also be affordable for their smaller recurring needs. Events come in all shapes and sizes, and we’re proud that this scalability allows us to thrive in Northwest Arkansas,” Magee says.

Two of their most recent large events were the Mercy Charity Ball Fort Smith on Dec. 8, 2018, and Northwest Arkansas Children’s Shelter Starlight Gala on March 2, 2019. Both had more than 1,000 guests in attendance! Magee noted that the Fort Smith event featured a 110 feet-wide projection screen, almost 100 lighting fixtures, and the set up and rehearsals took 2.5 days.

More big news … avad3 won the bidding process to be the event production company at the University of Arkansas commencement for the next seven years. Go Hogs!

“avad3 is proud to say that it will be our team making those microphones, lights and cameras work flawlessly for the next seven years in Fayetteville,” Magee says. “If you’re there to celebrate a graduate, come say hi to our crew!”

3 months ago by 3W
LELA DAVIDSON Vice President, Account Leadership & Client Partnership, Saatchi & Saatchi X 1. How are you pivoting? Should not be a pivot, but paying extra attention to how people are coping and trying to support them where I can. 2. Best part of you...