A Comedy of Tenors 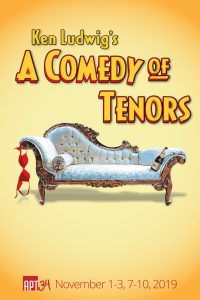 In this hilarious sequel to "Lend Me a Tenor," we have one hotel suite, four tenors, two wives, three girlfriends, and a soccer stadium filled with screaming fans. What could possibly go wrong? It’s 1930s Paris and the stage is set for the concert of the century – as long as producer Henry Saunders can […]