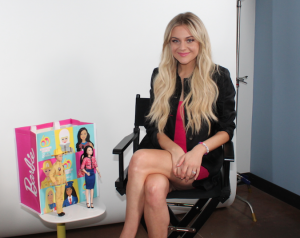 Happy 60th Anniversary, Barbie! Over the years, Barbie has been a princess, president, police officer, paleontologist, pediatrician … she’s tackled just about every career!

Mattel’s Barbie ‘Be Anything’ Tour celebrates 60 years of inspiring the limitless potential in every girl. The traveling pop-up tour, designed to inspire girls they can be anything, kicked off on Barbie’s 60th anniversary on March 9, at our very own Walmart in Rogers. Kelsea Ballerini, two-time GRAMMY nominee and chart-topping Country music star, dropped by to share her story with fans and show off the one-of-a-kind Barbie doll in her likeness inspired by her latest single, “Miss Me More.”

The Barbie role models program honors women who have broken boundaries to inspire the next generation of girls. Ballerini joins a global line-up of more than 20 role models honored for Barbie’s 60th anniversary.

Ballerini’s advice for girls is “to surround yourself with people that make you feel like you could do anything.”

“And if there are people that tell you that you can’t grow up and be a doctor, or a pilot, or a teacher, or a singer, or whatever, then maybe those aren’t the right people to have around you. Because history shows that you can do all those things, and so it’s just about having people in your ear that empower you and tell you (that) you can,” she says. “You just need the right voices around to help you realize that and chase that down the road.”

Barbie fans also got to hear from Harrison, Arkansas, native Ruby Kate Chitsey, an 11-year-old raising funds for impoverished elderly in nursing homes. She may seem familiar to you as she’s been ALL over social media lately since being featured on CBS Sunday Morning after raising money for nursing home residents by simply asking them their three wishes. For her Three Wishes project, which started last summer, she asks nursing home residents the following question: “If I could bring you 3 things in the whole world, what would those be?” Through a GoFundMe account, she has currently raised more than $230,000 to help these patients get their wishes, such as a warmer blanket for their bed or new shoes. To learn more about Ruby Kate and her fundraising efforts, visit www.facebook.com/3wishesforrubysresidents/.

For more details about the Barbie ‘Be Anything’ Tour and all of its stops, visit www.walmart.com/barbiebeanything and follow #barbiebeanythingtour and #barbie60.

Commit to the Pivot

5 days ago by 3W
Life is still mostly rescheduled this month, but there are a few nonprofits who have committed to the pivot and are hosting virtual fundraisers, online auctions and live streaming opportunities to continue giving locally. HERE'S WHAT'S HAPPENING NOW: · &nb...

2 weeks ago by 3W
Walmart NW Arkansas Championship presented by P&G event officials announce today that the annual 5K @ the LPGA, originally slated for June 20, will transform into Miles for Mercy in 2020. This virtual community challenge will support the Mercy Health Fou...

Keep Calm and Plan On

3 weeks ago by 3W
By Cameron Magee Founder, avad3 Event Production While COVID-19 has touched every aspect of our communities, many local and national nonprofits – built specifically to help the most vulnerable – are facing outsized demand while having to postpone crucial fund...

1 month ago by 3W
Life is still rescheduled in May, and that includes the events that were going to happen this month. HERE'S WHAT'S HAPPENING NOW: ·     St. Joseph Catholic School Men's Night – RESCHEDULED to Oct. 2 ·     Arkansas Public Theatre’s “Buyer & Cellar” - C...

1 month ago by 3W
In partnership with the LPGA Tour, local event organizers announce today that the Walmart NW Arkansas Championship presented by P&G, originally scheduled for June 15-21, has been postponed. The LPGA golf tournament is rescheduled for Aug. 24-30 at Pinnac...

1 month ago by 3W
In our 2020 issue, we’re shining the light on some outstanding leading ladies for all their accomplishments and contributions to society. JODY PINSON Vice President Beauty, Walmart Education: B.S. Accounting, University of Arkansas Did you always know what ...