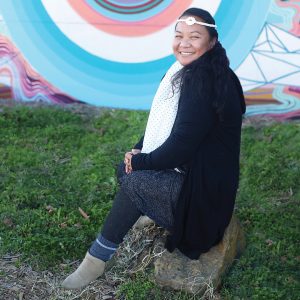 In our 2021 issue, we’re shining the light on several amazing Leading Ladies.

Melisa Laelan was born and raised in the Marshall Islands. At age 16, she graduated top of her high school in the islands. A year later she enlisted in the United States Armed Forces. While in the Army, she was offered the opportunity to serve as a logistic specialist within various units throughout the United States and abroad including Asia and Europe. It was then that she acquainted with people from different cultures and became more appreciative of the diversity she experienced. After 10 years in the service, she moved to Arkansas to attend the University of Arkansas in 2004 and study international relations. Because of her prior service with the Armed Forces, she was able to obtain her citizenship, and in 2011, she became a U.S. citizen. In 2011, along with other Marshallese leaders, Melisa founded Arkansas Coalition of Marshallese (ACOM), and in 2015, ACOM received its nonprofit status, making it the first organization founded and directed by native Marshall Islanders. As the executive director of ACOM, she has become a resource contact in both Marshallese and non-Marshallese communities.

Did you always know what you wanted to do?
I wanted to be a businessperson in my early life. It was later that I found working with people and helping was what I wanted to do while I was in the service. I knew I had the drive and the commitment that would afford me some level of leadership in working with the community. I have been told my brain functions like a computer because I have a large ram storage of experience and knowledge, and I’m good at responding to issues and am a fast thinker.

When did you know what you wanted to do?
At an early age, I had always dreamed to thrive at being independent. We call it kajironron in my native language. All of that came from seeing struggles in my own families and where I grew up. I knew I was quite different from siblings and cousins and I wanted something different – not necessarily a good thing.

Best part of your job:
I enjoy every aspect of my job, especially the responsibility of looking at ways that the Marshallese community can grow while maintaining their identity. It is okay to function in a new world and be able to adapt and never forget where you came from. Before running a new program, I always ask, “How do I bring a program that’s meaningful to the people? Is it going to work and what level of effectiveness will it have?” Serving the community is what drives me, and as long as I have this job I will do that. I love being creative, and I am always thankful for all the partnerships that we have with different organizations and agencies. I learn so much every day through my job, and I know I have a lot of learning to do. I am touched when a community member reveals to us that the work that ACOM did saved her from losing her home or a family telling us that they were able to buy a home.

First big break:
When I became the first Marshallese Certified Interpreter in the nation.

Quality you admire most in women:
Women are silent powerful machines, and we get things done. Women are multitaskers. I admire the fact that we can be the nurturer, thinker, shaker and remain a strong force.

What changes have you seen within your workplace in regard to empowering women?
I came from a culture that has a matrilineal society, but there are certain things that women are prohibited to do. Our ancestral women had the power to put a warfare to cease, speak to the power of our roles. Nowadays, women have little political power. So, I grew up in a world that I was already assigned a role. I think the training that I received in the military prepared me to get my mentality out of the gender inequality because it trained me and constantly told me that I was as good as anyone else.

In what ways have you professionally had to pivot during the current pandemic?
I think we started working from home in March 2020. By then we already had programs that had rolled out to assist families with rent, bills and other expenses. It was later in April that we realized we had to open the program to the community. So, the timing was just right. But it was in April that we started focusing on COVID-19 when things started picking up. Pivoting to online work and working from home was something unfamiliar to me and the ACOM team. It took a while to get used to distant meeting and assisting clients from afar. We had to be creative and had to learn quickly that we better catch up or we would end up with piles of work. COVID-19 took me to uncomfortable places. Asking for money is never easy, but this time I knew we were dealing with something bigger than we ever imagined. Our office was instantly inundated with requests to assist with rent, bills and food. We also learned how to fundraise ourselves and create the messaging. We added on more COVID-19 education to our weekly livestreams. Connecting to legislators was very important for us to make them understand the level of damages that COVID-19 has left the community. To combat the food security issue, ACOM established Marshallese ENRÃ Food Pantry. Since its inception, it has served over 5,000 community members through food drive-thrus, turkey giveaways and more.

What do you do for fun?
I enjoy walking or just hanging out with my family.

Who is your biggest inspiration?
One of my sisters — because she didn’t finish high school but she raised her children to be successful young adults.

Best advice you’ve ever received:
If you fall, pick yourself up and keep going.

Surprising fact about you:
I love cooking, and I like to decorate my house.

How are you practicing self-care?
It is really hard, but I do go to the salon every so often a year.  I have also found out that you don’t have to answer calls when you are on a break.

How do you stay motivated?
My family keeps me motivated. My husband and I often make time to walk and chat about things. I find that very therapeutic. But my favorite time aside from arriving at home is to watch Netflix. In terms of my job, the community drives my motivation.

What nonprofits are you involved with and why?
Arkansas Coalition of Marshallese (ACOM) because I believe in its vision and the mission. Its mission is to empower the Marshallese community through a culturally sensitive approach to education, leadership, policy and holistic services.

You can view Melisa’s page in the Leading Ladies segment of the 2021 3W Magazine here.

4 weeks ago by 3W
NATALIE TIBBS Executive Director of Children’s Advocacy Center of Benton County and Restoration Village Natalie Tibbs was born in Tulsa, Oklahoma, but her family moved to Rogers when she was 6 years old. She is the youngest of five children. Her parents op...

1 month ago by 3W
In our 2021 issue, we’re shining the light on several amazing Leading Ladies. MAURIAHH ESQUIVEL V.P. Group Creative Director, Saatchi & Saatchi X Born in Neosho, Missouri, Mauriahh Esquivel is an only child from a small but mighty family. She grew u...

1 month ago by 3W
ASHLEY STARNES Owner, Osage House A Northwest Arkansas native, Ashley Starnes has enjoyed bringing something new and unique to the area. She and her team have held a huge part in over 80 beautiful weddings and events in the past year, and she has been alon...

1 month ago by 3W
In our 2021 issue, we’re shining the light on several amazing Leading Ladies. CHRISTINE WILBURN Vice President, Customer Development, Unilever - Walmart Consumables Christine Wilburn is from the small town of Vandalia, Missouri, where she was instilled ...