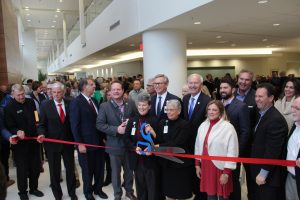 Mercy invested $147 million in the seven-story tower as part of a $277 million expansion announced in April 2016 that also included Mercy Springdale, a multispecialty clinic with a 24-hour ER, and six other new clinics. Visitors to the 279,000-square foot addition on the hospital’s west side will enter through the new 9,500-square foot gallery space.

Some important features of the new tower include:

“It’s wonderful to be with you today in this beautiful space as we celebrate the past, present and future of care with the Sisters of Mercy,” said hospital President Eric Pianalto. “We bless this space and the caregivers who work within it because we believe they are truly an extension of the healing hand of Jesus going back to Catherine McAuley’s founding of our ministry in 1831.”

Monday marks the anniversary of McAuley’s passing on Nov. 11, 1841, when she entrusted her ministry to sisters she had helped train and worked alongside.

“One of our favorite quotations of Catherine’s is to be good today but better tomorrow,” Pianalto said. “We take her advice to heart today, tomorrow and the day after that. We strive to be continually better in the memory of our foundress and the sisters who carried on her vision.”

Evidence of Mercy’s dedication to continuous improvement includes recent recognitions. Mercy Hospital Northwest Arkansas was among three Mercy hospitals to be named a Top 100 Hospital nationally by IBM Watson Health. In addition, on Thursday, The Leapfrog Group announced that Mercy Hospital Northwest Arkansas was among just four hospitals in the state to receive an A grade in the group’s evaluation of safety as measured by outcomes such as preventing medical errors, infections and other patient harm.

Hines said that in his work regarding economic development, employers looking at the area emphasize the need for a focus on quality of life issues, including excellent health care services.

“How fortunate we are that Mercy has the faith in Northwest Arkansas to make such a big commitment,” he said.

“We’re so grateful to all of our donors for their generosity in helping us open doors for a community in need of greater access to care,” said Clark Ellison, vice president of Mercy Health Foundation.

The expansion in health care facilities and services comes with the creation of 1,000 new health care jobs, including at least 100 providers.

6 days ago by 3W
In our 2020 issue, we’re shining the light on some outstanding leading ladies for all their accomplishments and contributions to society. The leading ladies featured are: Mandy Macke, Laurice Hachem, Megan Crozier, Tareneh Manning, Dr. Evelyn E. Jorgenson, ...

6 days ago by 3W
As early as 12 years old, Cameron Magee found his calling when he was able to observe professional sound and video technicians. The young Magee promised not to talk or be a bother. Instead, he would simply watch as they effortlessly manipulated sound and vid...

2 months ago by 3W
Interacting with children and parents everyday, Brooks Coatney enjoys providing high-quality educational services for families in Northwest Arkansas. Brooks is the on-site owner of The Goddard School in Fayetteville, which opened in October 2017. Before becom...