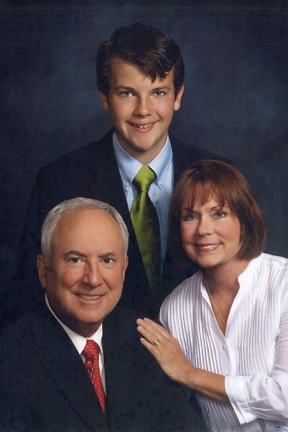 Steve and Elizabeth Schotta of Rogers have been chosen to receive a special honor by a national group dealing with issues related to adoption and foster care.

In mid-September, the Schottas will journey to Washington, D.C., to be recognized at a gala event among more than 150 of the 2012 Angels in Adoption TM awardees selected from throughout the nation by the Congressional Coalition on Adoption Institute (CCAI). The award recognizes people who have engaged in outstanding advocacy for adoption and/or foster care. Several “National Angels,” who have exhibited “dedication and commitment nationally and internationally on a grand scale” also will be honored.

The Schottas were nominated for the award by U.S. Sen. John Boozman of Rogers. “Steve and Elizabeth Schotta have dedicated much of their lives to helping provide a safe and loving environment for children,” Sen. Boozman observed. “Their continued support and promotion of adoption is truly inspiring. The Schottas are leading by example through opening their hearts and home to adoption and foster care and through Steve’s work at Northwest Arkansas Children’s Shelter. I am proud to recognize their efforts, and I am hopeful that their story will motivate the community.”

Schotta is the Executive Director of Northwest Arkansas Children’s Shelter. The Schottas are passionate advocates for and active participants in the adoption and foster-care systems. Between them, they have adopted and raised three sons, and they now serve as foster parents.

As a 35-year veteran of the business community, Schotta’s professional path includes a rich history of organizational leadership, including 26 years with Kimberly-Clark Corp., where he eventually served in senior management as head of the company’s Walmart team. But in July 2011, his professional course converged with his passion for helping children in need, when (after four years on the Children’s Shelter’s Board of Directors), he became Executive Director. Schotta, a native of Milford, Conn., holds a bachelor’s degree in psychology from Central Connecticut State University at New Britain, Conn.

Mrs. Schotta, a native of Savannah, Ga., earned a bachelor’s degree in history from the University of Georgia and enjoyed a long career in law-enforcement and corrections in the Atlanta area, eventually serving as a Chief Parole Officer and finally a Parole Review Officer.

The Schottas’ passion to help children who, through no fault of their own, end up in the foster-care system has its genesis in the couple’s personal experiences with adoption. In the 1980s, Schotta adopted two boys (ages 8 and 9) from foster care in Ohio and Virginia. And in the late 1990s, he and Elizabeth adopted their son, Stephen, at birth. These experiences have given the Schottas special insight into the challenges and rewards that accompany the process of nurturing young lives that have been impacted by such unfortunate circumstances.

“I was blessed to have loving parents who invested their time, energy, resources and wisdom in me and positioned me to have a better life than they had,” Schotta observed. “And I have always had a place in my heart for kids who don’t have that. In a way, I feel I am honoring my own parents by reaching out to children who need a home. After all my parents did for me, I feel it’s the least I can do.”

“And it’s nice to have this sense of purpose now spill over into my work life. At the Children’s Shelter, we provide emergency residential care for displaced kids, 24 hours a day. We usually are the first stop for children entering the foster-care system, which, in my view, means that we have a huge responsibility to make them feel safe, cared for and wanted from the very beginning of their journey. And, as good parents should, we meet their immediate needs and help them prepare for what comes next. Like parenting, it is challenging but rewarding work.”

Additionally, Mrs. Schotta’s time working in the parole system gave her a keen appreciation of the role that a strong, positive parental influence and a stable home life can play in keeping children from taking the wrong path in adulthood.

“Being involved in adoption and foster care has made such an impact on me because I truly appreciate the privilege of being a parent,” Mrs. Schotta explained. “And it is a privilege … but it also is a serious responsibility. Too many parents think their kids exist to make them happy. They don’t realize that it is their job to provide a stable, nurturing, loving home life that equips their children to lead happy, healthy lives. Unfortunately, I have witnessed the aftermath of irresponsible or absent parents.”

Northwest Arkansas Children’s Shelter is a private, non-profit organization that provides 24-hour emergency residential care to children and teens from throughout Arkansas who are victims of abandonment, abuse or neglect. The 48-bed Children’s Shelter, which currently serves about 500 children per year, has served more than 6,100 children since opening its doors at Vaughn (southwest of Bentonville) in 1993. Children may stay up to 45 days in a six-month period, until they can be placed in foster care or return to their families. In April 2011, the Children’s Shelter moved into a new, 65,500-square-foot complex on an 81-acre campus in Highfill. The Children’s Shelter’s unique features include its On-Site School, on-site counseling, comprehensive case management, enrichment activities and an ability to accommodate large sibling groups.

Is life insurance worth it?

1 month ago by 3W
In an effort to continue to provide food to those in need during this Covid-19 crisis, KraftHeinz recently donated a large amount of ready to eat meals to the Northwest Arkansas Food Bank. The donation consisted of assorted Smart Ones® meals, which will provi...

1 month ago by 3W
Mercy Hospital Northwest Arkansas has opened a 22-bed unit dedicated to the post-operative needs of patients undergoing orthopedic and spine surgeries. Mercy has also added an orthopedic service line coordinator and a nurse navigator who help guide joint repl...

2 months ago by 3W
JENNIFER NECESSARY Executive Director, ALS Association - Arkansas Chapter 1. Best part of your job: Serving with my whole heart and positively impacting people’s lives in a big way. This disease is bigger than anything imaginable and these people need us figh...