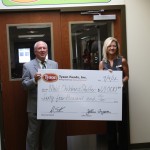 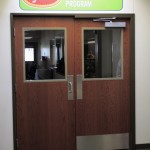 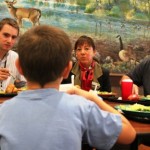 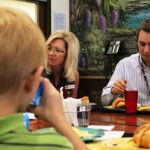 Tyson Foods served up a heaping helping of support for the nutritional needs of abused and neglected kids today, in the form of a major grant to establish Tyson Foods’ Nutritious Meals Program at Northwest Arkansas Children’s Shelter.

Officials with Tyson Foods presented a giant ceremonial check to the Children’s Shelter and then joined its residents for a celebratory lunch of Tyson chicken tenders and nuggets.

The one-year Tyson grant of $64,000 will partially fund the children’s emergency shelter’s food and nutrition program, which has an annual budget of $112,000. The Children’s Shelter expects about $48,000 in reimbursement from other sources this fiscal year (July 1, 2012-June 30, 2013), so the Tyson grant effectively funds the balance of this year’s food and nutrition budget.

“This donation is another example of our company’s ongoing efforts in the fight against hunger,” said Ed Nicholson, Director of Social Media & Community Relations, who oversees Tyson Foods’ hunger-relief efforts. “We’re grateful for the work of the Northwest Arkansas Children’s Shelter and are proud to help ensure at-risk children are receiving the nutritious food they need to be healthy.”

“Many of the children who come to us have significant nutritional challenges, due to the neglectful environments from which they have come,” Schotta observed. “Malnourishment and developmental delays are all too common for the children in our care, and very often, these children have no concept of healthy eating principles and practices. So nutrition plays a substantial role in our everyday routine at the Children’s Shelter. It’s a crucial part of the services we provide, and we are very grateful that Tyson Foods, which has been a long-time supporter of the Children’s Shelter, has taken this amazing step to single-handedly fund the remaining portion of our food budget for this fiscal year. Help from partners like Tyson Foods is critical because even though the children in our care are placed here by the state of Arkansas, the reimbursement we receive from the state represents only 20 percent of our overall annual budget of $3 million. We depend on gifts like this one to make up the other 80 percent.”

Each day, Children’s Shelter residents are provided with three meals, two snacks and fresh fruit, which is readily available to them during the day. Meals are prepared on-site, and each offering is planned by the Children’s Shelter’s Food & Nutrition staff, in consultation with a registered dietician. The individualized attention that each resident receives helps the Food & Nutrition staff manage special nutritional concerns, such as malnourishment and other medical conditions, food allergies and special dietary needs. In the short time the Children’s Shelter’s staff has with the children, staff members seek to meet their immediate nutritional needs in an educational context that will hopefully help them make healthy choices throughout their lives.

Tyson Foods has fought hunger in the U.S. for a decade, donating more than 86 million pounds of protein. The company partners with Food Research and Action Center, Feeding America, Share Our Strength, Lift Up America and the League of United Latin American Citizens to raise awareness and help feed the hungry across the nation. As part of its 2012 “Show Us Your Nugget Face” promotion (www.ShowUsYourNuggetFace.com), in which the public voted on their favorite children pictured with Tyson Chicken Nuggets, Tyson Foods pledged to donate 1 million pounds of food to hunger-relief organizations throughout America.

3 days ago by 3W
When you’re invited to a party hosted by Danyelle Musselman and Mandy Macke, of course you go. We put on our cutest red attire and went ready to cheer on the Hogs! The Razorback cheer squad kicked things off in style (or should we say spirit?). It’s no surp...

2 weeks ago by 3W
In our 2020 issue, we’re shining the light on some outstanding leading ladies for all their accomplishments and contributions to society. The leading ladies featured are: Mandy Macke, Laurice Hachem, Megan Crozier, Tareneh Manning, Dr. Evelyn E. Jorgenson, ...

2 weeks ago by 3W
As early as 12 years old, Cameron Magee found his calling when he was able to observe professional sound and video technicians. The young Magee promised not to talk or be a bother. Instead, he would simply watch as they effortlessly manipulated sound and vid...